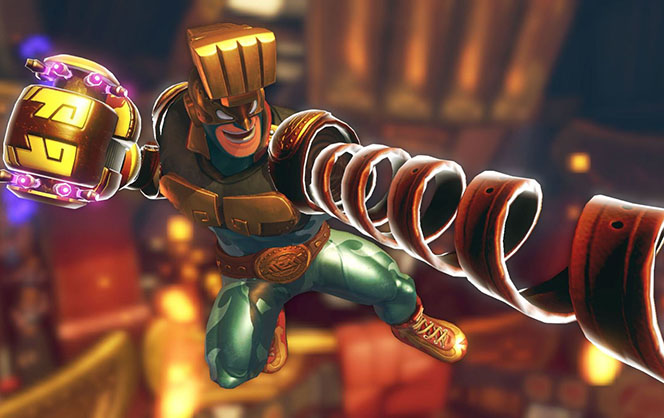 The free 2.0.0 update for #ARMS is now available download, with plenty of changes competitive fans will want to see! 👀 pic.twitter.com/7CEEVGlW4v

The newest update for Arms for Nintendo Switch is live! With the update, we’re getting Max Brass as a playable character, with many changes coming under the hood as well as some that change up ranked play and add new arms to unlock!

I’ve taken some time away from Arms, but, I find myself going back quite often, the motion controls are fantastic, and easily are a part of the incentive of returning to Arms. The added update that came out today will give me hours this weekend to dive in and see all the changed that have been made.

•ARMS League Commissioner Max Brass added as a playable character
•New ARM “Nade” added
•New ARM “Roaster” added
•New ARM “Kablammer” added
•New stage “Sky Arena” added
•New versus mode “Hedlok Scramble” added. ◦Punch or touch the capsule containing the Hedlok mask to become Hedlok for a period of time. This can be selected in Versus, Friend, or Local and it will also appear in Party Match
•”Stats” added to the Top Menu. ◦Check stats such as your most used fighter, best stage, and ARM accuracy
•”Events” added to the Top Menu. ◦Here you can set whether or not you want to join official online events
•Snake Park has been swapped out for Sky Arena in the Ranked Match stage roster
•Raised highest rank in Ranked Match to 20
•Increased the penalty for disconnecting during Ranked Match play
•Shortened the amount of time necessary for the following ARMS to return after being extended, making them easier to use: Megaton, Megawatt, Revolver, Retorcher, Boomerang
•Increased movement speed of the Guardian
•Improved visibility during charge attacks for the Popper and Cracker
•Increased the amount of time necessary for the following ARMS to return after being knocked down, increasing risk: Popper, Cracker, Hydra
•Increased the amount of time it takes to recover when a grab is deflected with a single punch
•Decreased the amount of damage when the Hydra’s rush connects with multiple consecutive hits
•Decreased the distance Kid Cobra travels when jumping
•Fixed issue where in some instances Ribbon Girl could remain airborne for an overlong period of time while continually attacking
•Fixed issue where Ninjara would not destroy the light boxes on the Ribbon Ring stage when getting up
•Fixed issue where the time necessary for the Triblast to return when deflected was shortened
•Fixed issue where ARMS such as Blorb and Megaton would catch on the ground and fail to fire
•Fixed issue where explosive ARMS would sometimes fail to explode when receiving an attack
•Fixed issue where the Slapamander would sometimes fail to hit Helix when he is extended
•In online play, fixed issue where the appearance or non-appearance of items could differ between devices
•In online play, fixed various issues with V-Ball including an issue where the ball would remain grounded and play would not proceed
•In online play, fixed an issue where sometimes Barq would continually defend against an opponents’ rush attack for a set period of time
•In online play, fixed issue where sometimes pillars in the Scrapyard would not be destructible